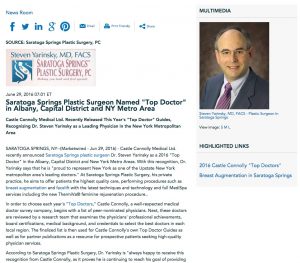 In order to choose each year’s “Top Doctors,” Castle Connolly, a well-respected medical doctor survey company, begins with a list of peer-nominated physicians. Next, these doctors are reviewed by a research team that examines the physicians’ professional achievements, board certifications, medical background, and credentials to select the best doctors in each local region. The finalized list is then used for Castle Connolly’s own Top Doctor Guides as well as for partner publications as a resource for prospective patients seeking high-quality physician services.

According to Saratoga Springs Plastic Surgery, Dr. Yarinsky is “always happy to receive this recognition from Castle Connolly, as it proves he is continuing to reach his goal of providing superior quality care in plastic surgery.” In addition to this accolade, he was recently named “Best of the Saratoga Region” for the fourth year in a row by Saratoga Today’s readers. He takes pride in his work and is proud that he is making an impact locally and beyond. Dr. Yarinsky aims to help all of his patients look and feel their best, and by offering a wide range of cosmetic surgical and non-surgical MediSpa procedures, he can offer these men and women customized treatment plans to achieve their cosmetic goals. He is the only Capital District area physician certified as an ‘Expert Injector’ by New Beauty Magazine and as such he personally does all BOTOX® Cosmetic and facial filler  treatments at his medical practice.