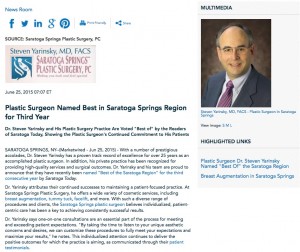 Dr. Steven Yarinsky and his plastic surgery practice are voted “Best Of” by the readers of Saratoga Today, showing the plastic surgeon’s continued commitment to his patients.

Saratoga Springs, NY – With a number of prestigious accolades, Dr. Steven Yarinsky has a proven track record of excellence for over 25 years as an accomplished plastic surgeon. In addition, his private practice has been recognized for providing high-quality services and surgical outcomes. Dr. Yarinsky and his team are proud to announce that they have recently been named “Best of the Saratoga Region” for the third consecutive year by Saratoga Today.

Dr. Yarinsky attributes their continued successes to maintaining a patient-focused practice. At Saratoga Springs Plastic Surgery, he offers a wide variety of cosmetic services, including breast augmentation, tummy tuck, facelift, and more. With such a diverse range of procedures and clients, the Saratoga Springs plastic surgeon believes individualized, patient-centric care has been a key to achieving consistently successful results.

Dr. Yarinsky says one-on-one consultations are an essential part of the process for meeting and exceeding patient expectations. “By taking the time to listen to your unique aesthetic concerns and desires, we can customize these procedures to fully meet your expectations and maximize your results,” he notes. This individualized attention continues to deliver the positive outcomes for which the practice is aiming, as communicated through their patient testimonials.

Dr. Yarinsky is particularly honored that he and his practice have once again received Saratoga Today’s “Best Of” awards, as these distinctions are based off of the public’s vote. The readers of Saratoga Today have continued to recognize the hard work of Dr. Yarinsky, which serves as a testament to the appreciation, respect, and trust the people of the Saratoga region place in him and his team at Saratoga Springs Plastic Surgery, PC.