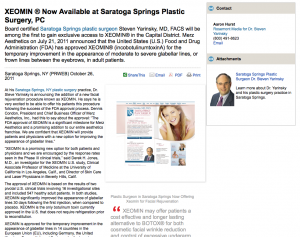 Board certified Saratoga Springs plastic surgeon Steven Yarinsky, MD, FACS will be among the first to gain exclusive access to XEOMIN® in the Capital District. Merz Aesthetics on July 21, 2011 announced that the United States (U.S.) Food and Drug Administration (FDA) has approved XEOMIN® (incobotulinumtoxinA) for the temporary improvement in the appearance of moderate to severe glabellar lines, or frown lines between the eyebrows, in adult patients.

At his Saratoga Springs, NY plastic surgery practice, Dr. Steve Yarinsky is announcing the addition of a new facial rejuvenation procedure known as XEOMIN. He says he is very excited to be able to offer his patients this procedure following the success of the FDA approval process. Dennis Condon, President and Chief Business Officer of Merz Aesthetics, Inc., had this to say about the approval: “The FDA approval of XEOMIN is a significant milestone for Merz Aesthetics and a promising addition to our entire aesthetics franchise. We are confident that XEOMIN will provide patients and physicians with a new option for improving the appearance of glabellar lines.”

“XEOMIN is a promising new option for both patients and physicians and we are encouraged by the response rates seen in the Phase III clinical trials,” said Derek H. Jones, M.D., an investigator for the XEOMIN U.S. study, Clinical Associate Professor of Medicine at the University of California in Los Angeles, Calif., and Director of Skin Care and Laser Physicians in Beverly Hills, Calif.

The approval of XEOMIN is based on the results of two pivotal U.S. clinical trials involving 16 investigational sites and included 547 healthy adult patients. In both studies, XEOMIN significantly improved the appearance of glabellar lines 30 days following the first injection, when compared to placebo. XEOMIN is the only botulinum toxin currently approved in the U.S. that does not require refrigeration prior to reconstitution.

XEOMIN is approved for the temporary improvement in the appearance of glabellar lines in 14 countries in the European Union (EU), including Germany, the United Kingdom, France, Italy and Spain, under the brand name BOCOUTURE®.

XEOMIN will be available nationwide to physicians in the spring of 2012, but is available now at Saratoga Springs Plastic Surgery, PC. Dr. Yarinsky says XEOMIN differs from BOTOX® Cosmetic because it lacks proteins that may induce an allergic response that can lessen its effectiveness. “XEOMIN may offer patients a cost effective and longer lasting alternative to BOTOX® for both cosmetic facial wrinkle reduction and control of excessive underarm perspiration (axillary hyperhidrosis).”

Dr. Steve Yarinsky earned his medical degree from SUNY Upstate Medical Center, Syracuse, and completed his general surgery residency at Ohio State University Hospital. He then completed two years in intensive cosmetic and reconstructive surgery training at the Medical College of Ohio, where he focused on a number of procedures, including breast augmentation, liposuction, and abdominoplasty. Dr. Yarinsky was selected as a Top plastic surgeon by Consumers’ Research Council of America in 2010 and 2011. He is a member of the American Society for Aesthetic Plastic Surgery and the American Society of Plastic Surgeons.