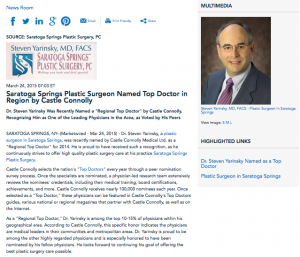 Dr. Steven Yarinsky was recently named a “Regional Top Doctor” by Castle Connolly, recognizing him as one of the leading physicians in the area, as voted by his peers.

Castle Connolly selects the nation’s “Top Doctors” every year through a peer nomination survey process. Once the specialists are nominated, a physician-led research team extensively reviews the nominees’ credentials, including their medical training, board certifications, achievements, and more. Castle Connolly receives nearly 100,000 nominees each year. Once selected as a “Top Doctor,” these physicians can be featured in Castle Connolly’s Top Doctors guides, various national or regional magazines that partner with Castle Connolly, as well as on the Internet.

As a “Regional Top Doctor,” Dr. Yarinsky is among the top 10-15% of physicians within his geographical area. According to Castle Connolly, this specific honor indicates the physicians are medical leaders in their communities and metropolitan areas. Dr. Yarinsky is proud to be among the other highly regarded physicians and is especially honored to have been nominated by his fellow physicians. He looks forward to continuing his goal of offering the best plastic surgery care possible.

Dr. Yarinsky attended medical school at SUNY Upstate Medical Center in Syracuse and then completed five years of general surgery residency at Ohio State University Hospital, Columbus and Marshall University Medical School. He then trained in cosmetic and reconstructive surgery for two years at the Medical College of Ohio. Dr. Yarinsky is active in several medical organizations, including being a member of the American Society of Plastic Surgeons and the Northeastern Society of Plastic Surgery, as well as a Diplomat of the American Board of Plastic Surgery and a Fellow of the American College of Surgeons. He is available for interview upon request.