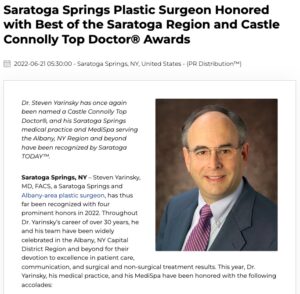 Dr. Steven Yarinsky has once again been named a Castle Connolly Top Doctor®, and his Saratoga Springs medical practice and MediSpa serving the Albany, NY Region and beyond have been recognized by Saratoga TODAY™.

Saratoga Springs, NY – Steven Yarinsky, MD, FACS, a Saratoga Springs and Albany-area plastic surgeon, has thus far been recognized with four prominent honors in 2022. Throughout Dr. Yarinsky’s career of over 30 years, he and his team have been widely celebrated in the Albany, NY Capital District Region and beyond for their devotion to excellence in patient care, communication, and surgical and non-surgical treatment results. This year, Dr. Yarinsky, his medical practice, and his MediSpa have been honored with the following accolades:

Dr. Yarinsky says that receiving these honors has been both humbling and inspiring. The respect and recognition from patients and medical professionals only reinforce his and his team’s ongoing commitment to providing patients with the highest-quality standard of care.

About Steven Yarinsky, MD, FACS
Board-certified plastic surgeon Steven Yarinsky, MD, FACS is an alumnus of Dartmouth College and SUNY Upstate Medical Center, Syracuse. He received his five-year general surgery residency at Ohio State University Hospital, Columbus, and Marshall University Medical School before entering a two-year Cosmetic and Reconstructive Surgery residency training at the Medical College of Ohio. He is a member of The Aesthetic Society®, the American Society of Plastic Surgeons, the Northeastern Society of Plastic Surgeons, the New York Regional Society of Plastic Surgeons, and other prestigious boards and organizations. A Fellow of the American College of Surgeons and a Diplomat of the American Board of Plastic Surgery, Dr. Yarinsky oversees Saratoga Springs Plastic Surgery, PC and Saratoga Springs MediSpa, which offer cosmetic enhancement procedures such as breast augmentation, facelift surgery, body contouring treatments, non-surgical cosmetic treatments, and many other advanced options. He is available for interview upon request.