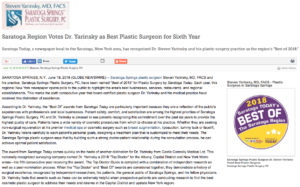 Saratoga Today, a newspaper local to the Saratoga, New York area, has recognized Dr. Steven Yarinsky and his plastic surgery practice as the region’s “Best of 2018.”

According to Dr. Yarinsky, the “Best Of” awards from Saratoga Today are particularly important because they are a reflection of the public’s experiences with professionals and local businesses. Patient safety, comfort, and satisfaction are among the highest priorities of Saratoga Springs Plastic Surgery, PC and Dr. Yarinsky is pleased to see patients recognizing this commitment over the past six years to provide the highest quality of care. Patients have a wide variety of cosmetic procedures from which to choose at his practice. Whether they are seeking non-surgical rejuvenation at his premier medical spa or cosmetic surgery such as breast augmentation, liposuction, tummy tuck or facelift, Dr. Yarinsky listens carefully to each patient’s personal goals, designing a treatment plan that is customized to meet their needs. The Saratoga Springs plastic surgeon says that by building such a strong doctor-patient relationship during the consultation process, he can achieve optimal patient satisfaction.

The award from Saratoga Today comes quickly on the heels of another distinction for Dr. Yarinsky from Castle Connolly Medical Ltd. This nationally recognized surveying company named Dr. Yarinsky a 2018 “Top Doctor” for the Albany, Capital District and New York Metro areas—his fifth consecutive year receiving the award. The Top Doctor Guide is compiled with a combination of independent research as well as a peer-nomination process. When the “Top Doctor” and “Best Of” awards are considered together, they demonstrate a history of surgical excellence, recognized by independent researchers, his patients, the general public of Saratoga Springs, and his fellow physicians. Dr. Yarinsky feels that awards such as these can be extremely helpful when prospective patients are conducting research to find the best cosmetic plastic surgeon to address their needs and desires in the Capital District and upstate New York region.