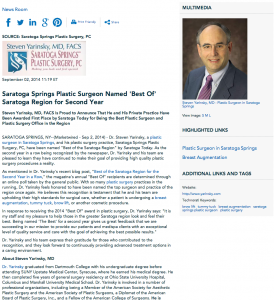 Steven Yarinsky, MD, FACS is proud to announce that he and his private practice have been awarded first place by Saratoga Today for being the best plastic surgeon and plastic surgery office in the region.

As mentioned in Dr. Yarinsky’s recent blog post, “Best of the Saratoga Region for the Second Year in a Row,” the magazine’s annual “Best Of” recipients are determined through an online poll taken by the general public. With so many plastic surgery practices in the running, Dr. Yarinsky feels honored to have been named the top surgeon and practice of the region once again. He believes this recognition is testament that he and his team are upholding their high standards for surgical care, whether a patient is undergoing a breast augmentation, tummy tuck, brow lift, or another cosmetic procedure.

In response to receiving the 2014 “Best Of” award in plastic surgery, Dr. Yarinsky says: “It is my staff and my pleasure to help those in the greater Saratoga region look and feel their best. Being named ‘The Best’ for a second year gives us great feedback that we are succeeding in our mission to provide our patients and medispa clients with an exceptional level of quality service and care with the goal of achieving the best possible results.”

Dr. Yarinsky and his team express their gratitude for those who contributed to the recognition, and they look forward to continuously providing advanced treatment options in a caring environment.